The huge development of Playa Vista was built over the old Los Angeles river bed, now known as Ballona Creek.  It is also built over an area of oil and gas fields.  The area is so dangerous with methane and deadly chemicals from oil and gas that environmental studies pronounced that nothing should ever be built there.  That didn’t stop Goldman Sachs from financing developers to build this massive site, literally a small city.  According to our whistle blower, no environmental impact report was ever filed, and despite 10 years of litigation and a half million dollars in attorneys fees, the courts looked the other way and allowed the project to be built.  The City of Los Angeles, ignoring its responsibilities, allowed the project to be built because it has greatly benefited (as has the County) from the millions of dollars of property tax revenue pouring in.  Forget the dangers to public health, the environment, the aquifers, or anything else, the greed of the County and City for tax revenue over-shadows the lives of those who will get sick and die.  The developers and financiers have reaped a fortune on Playa Vista and are continuing to build ever more condos on the site to this very day.  The American Indians, whose burial grounds were torn up during this building frenzy, have allegedly said there is a curse on the site.  The money made by developers, the City, the County, and the financiers, could be called “blood money” if predicted death and destruction follows. Follow this incredible story of greed and reckless development in Part 4 of Poisoned Paradise.

The Gas and Oil Is Under Your Feet

The unfolding story of the deadly gas underneath Marina del Rey and Playa Vista as our Whistle-Blower, Mr. “X” explains how the War Department initiated storage of massive amounts of natural gas in a huge underground “cavern” during WW2.  They turned it over to the Southern California Gas Company after the war.  The bad news?  The entire area is punctured with hundreds of old oil wells.  The “safe” storage in this geologic formation is leaking, and no one is pressing the Gas Company to find out how much leakage there is, AND where it is going.  Part Three of this horrific story, with much more to come.

If you live in Los Angeles you will have heard of names like Beverly Hills High School, Belmont Learning Center, the La Brea Tar Pits, Marina del Rey and Baldwin Hills.  What do they all have in common?  Deadly leakage of gas and oil coming from abandoned oil fields as well as leakage from other situations.  Follow the trail with our Whistle-Blower as he narrates the gripping story that is still unfolding in this exclusive series of reports.

The Los Angeles Basin Was One of the Biggest, Richest Oil and Gas Bonanzas of all Time; It is also now One of the Most Poisoned Places in America.  “Mr. X”, a Whistleblower, Exposes the Corruption, Greed, Fraud, and a Reckless Government that Continues to this Day.  Because Underneath our Cities is a Monster, Laying in Wait to Spread Its Death to You.  The Monster is Oil and Gas, Seeping Out of the Depths Through Abandoned Wells, Making Its Way To The Surface and Ultimately Into The Water, The Air, Your Body.  Sometimes It Just Blows Up, Like a Bomb, With No Warning.  God Help You if You Are in the Wrong Place at the Wrong Time.

By the end of this series, you will know where NOT to live, where NOT to send your children to school, and where to avoid drinking the water.  This is an incredible story, one that goes back to the old days of the Spanish Land grants.  Our whistleblower follows the story down through the ages, from the wetlands to the massive modern real estate developments.  This series contains the most important information that you will ever need to live in Los Angeles.

Lee Harvey Oswald, the alleged assassin of President John F. Kennedy, had a mistress when he was operating in New Orleans for the F.B.I.  Her name was Judyth Vary; today her name is Judyth Vary Baker.  This is a story that will shatter the big lie of the Warren Report.  Her story is of her love for Lee Oswald.  What he was really like. And what he was really doing during his time in New Orleans in 1963.

Judyth Vary Baker has written a book called “Me and Lee”, published by Trine Day.  In this book she tells her story, the real story of love, intrigue, secret agents, David Ferrie, Mary Sherman, Guy Bannister, and other actors during the time she was Oswald’s girl.

Judyth Baker was in the Los Angeles area and spoke on November 27, 2012 at the Beverly Garland Hotel in Studio City.  She presented a talk and slide show covering a part of her documentation of the events described in her book.  Click here to see the 30 minute question and answer session posted on youtube.com.

If you would like to view the entire video of this event, over 1 hour, send an email to: unclepaulie@rocketmail.com.  We can send you a copy of this event on DVD for $10 plus $2 postage to any address in the U.S.

Tell your friends about this incredible event.  Judyth Baker has been in exile for decades, in fear for her life.  Most of the witnesses to the Kennedy assassination were murdered.  She is the sole survivor of important witnesses.  When she first wanted to talk about Lee Oswald, she went to 60 minutes.  Don Hewitt tried to get her story on national TV but was completely stonewalled.  He said later that it was one of the greatest stories he had run across, but the door was slammed in his face by the network!  Later, a cable channel did a series called The Men Who Killed Kennedy.  One of the chapters was on Judyth Baker.  It was shown a couple times, then her chapter was pulled from the series and never shown again, allegedly due to pressure from the family of LBJ.  Judyth then decided that she must write a book about her life, with complete documentation.  She is now risking her life to bring you the truth, the long suppressed story of Lee Harvey Oswald and his life in New Orleans with his lover, his mistress Judyth Baker. 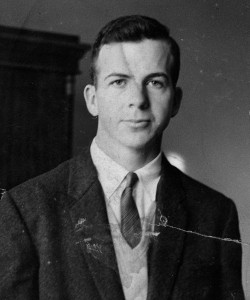 The real Lee Harvey Oswald, not the photo-retouched photos from a shameless Press!