There They Go Again – Howie Berman vs Brad Sherman

A One Round Fracus in the Van Nuys Pool Locker Room 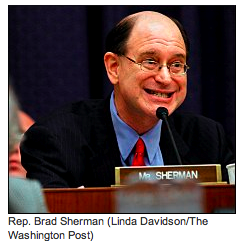 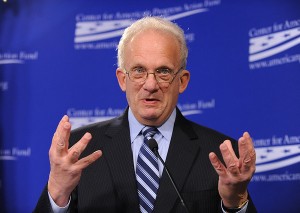 Berman (Left) “You wanna piece of me?”

Sherman (Right) “I already got it Howie!”

So according to my two witnesses, who spoke on the condition of anonymity, Howard Berman and Brad Sherman swim often at the Pool in Van Nuys.  “But usually they don’t come at the same time” says Mr. Y.

“This morning”, says Mr. Z, “They both show at once, and the fireworks started!”

Mr. Y:  “They get in the locker room and they start screaming at each other.  Berman is yelling at Sherman, ‘You traitor, you stabbed me in the back!’  Serman is yelling back ‘F&%$ You, you’re a f&(%$ing crook!’  I thought they were going to come to blows.”

Mr. Z:  “Boy, those two guys really HATE each other.  I mean, we had to jump in between them.  They were screaming and waving their fists around.”

Berman, 71, served as a Representative in the Valley since 1983.  He is known as “Hollywood’s Congressman” by some, and “Studio Lap Dog” by detractors.  The entertainment industry showered him with money during this last election, over $400,000.  He certainly needed the dough, he was always traveling, in fact often accused of being on the road more than he was in Congress.  But re-districting has done him in, he had to run against a fellow Democrat, Brad Sherman, who beat him big time.  Some folks in his district described him as “aloof” and even “arrogant”.  He was such a shoe-in for election victory that he hardly had to campaign; just have a few dinners to raise some dough, and off on a “fact-finding” cruise to Europe.

Sherman, 58, has served in government and Congress for a while.  While Berman was lounging in foreign lands, Sherman was holding scores of Town Hall meetings, quietly building up support that proved more than enough to counter the big bucks from Hollywood.

Back to the locker room.  Mr. Y:  “Man, I was shocked.  I mean these two guys are both Jewish and both Democrats.  I thought they would get along with each other.”   In fact, on the campaign trail, things got so ugly that a Sheriff’s deputy had to break them apart.  I asked our informants if the fight got to the point of snapping wet towels at one another.  “No,” says Mr. Z, “Just yelling and screaming and insults.”

We suggest this animosity should be settled by an old fashioned duel.  How about standing 3 feet apart and hurling banana cream pies at one another along with the insults?  It would make for a great photo op, a paparazzi fun fest.  Hey, as they say, no harm done, nothing lost but dignity. 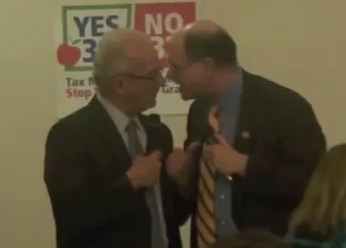 Note:  In the spirit of political fun, some portions of the conversations have been reconstructed out of the whole cloth of the 2 nameless informants who showed up at the Church lunch today for poor folks. Bon Apatite!